9 Matcha Smoothies You Can Try

For this Matcha Review, we are reviewing Uvernal Organic Ceremonial Matcha.

This matcha comes from from China and not Japan, but we wanted to try it and review it anyway. We prefer matcha green tea powder from Japan.

The first thing that we noticed about this matcha that we didn't like was the packaging. Most of the super premium matchas that we review come in a small aluminum can with a screw top lid.

The Uvernal Organic Ceremonial Matcha comes in an aluminum can, but with a plastic snap on lid. 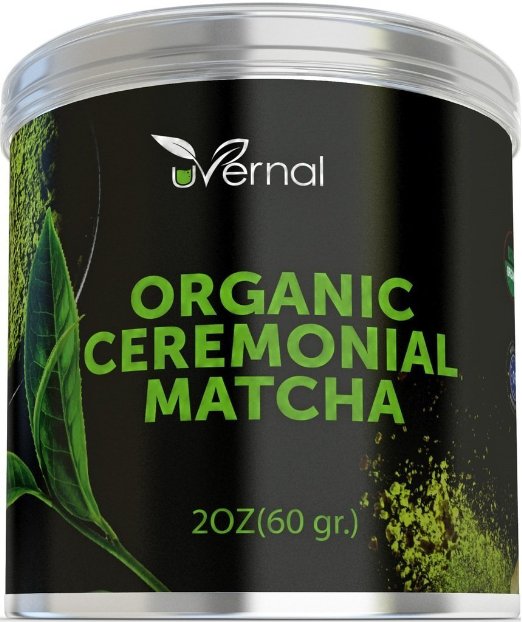 Our Rating 75/100
Latest Price at Amazon

So we have established that the packaging was less than optimal, but what about the Matcha itself?

We also stated above that the Uvernal Organic Ceremonial Matcha was from China. In our book that is two strikes right off the bat, but let's give it a chance.

We opened the can and smelled the matcha green tea powder. Instead of that fresh grassy smell, we were greeted with more of a bitter barnyard type smell.

Yea, not very pleasing to the nose, but we pressed on.

Upon opening the can, we found the color of this matcha to also be less than optimal. We were expecting the bright, vibrant green of high quality ceremonial matcha and instead we found a dingy green color that did not look the least bit appetizing.

We put some of the Uvernal Organic Ceremonial Match powder on a white background along with some other matcha green tea powders in order to get a good perspective on it's color characteristics.

You can see the results below.

As you can see in the photo, the Uvernal is one of the darkest green matchas and bore no resemblance to the top rated green tea powders.

The grind of the Uvernal Organic Ceremonial Matcha seemed to be on par with the others, but the very poor color hurt this rating tremendously.

Next Step for the Uvernal Matcha Review is to prepare the matcha green tea and rate it on taste.

I must admit that I was not looking forward to the taste test given the color and aroma of this matcha, but here goes.

I must admit that I was surprised by the taste of the Uvernal Organic Ceremonial Matcha.

I was expecting a strong, bitter barn like taste and instead I was greeted by a fairly mild, slightly sweet matcha green tea.

Even with the moderately good taste of this matcha green tea, I still can't recommend it.

Strike one - This matcha is from China.

Strike two - The color of this matcha green tea powder is not up to the standards of the super premium ceremonial matchas.

Strike three - It is very difficult to get past the smell of the green tea powder, even though it does not carry through to the tea.

The fact remains that there are some great tasting and smelling super premium organic ceremonial matchas available, so why spend your hard earned money on this one.

Click Here to See More Reviews on Amazon
Our Score 3.5
Next

The question that I am most often asked is: What made you start a website about matcha?
It all started with my matcha moment – The first time I tried matcha green tea. I’ve been hooked ever since.
I started this website in order to share my love of matcha and to help people to find the best matcha available.
My team and I are dedicated to bringing you the most up to date content on everything related to matcha.